THE WICKED by James Newman 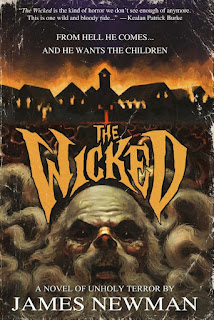 The Wicked by James Newman

Unaware of the turmoil in their new hometown, the Littles - David, Kate and seven-year-old Becca - are moving from New York City to Morganville in hopes of repairing their own lives, which were recently shattered by an act of sexual violence.

Before long, David realizes that his family's troubles are worse than he could ever have imagined.

An ancient demon lurks beneath the town of Morganville, an unholy creature conjured into existence by the Heller Home tragedy.

Its name is Moloch.

It is hungry for the souls of the townspeople.

But worst of all, Moloch wants the children. It will not rest until it has them.

That is some build up. The first thing that caught me as I read the description was the use of the name Moloch. He or shall we say it, has been a character/deity used in many a novel and movie. He even showed up in the Sleepy Hallow tv series. So another Moloch tale. Lets give it a try.

James Newman does not disappoint. This is as close to a classic 80s horror paperback as you can get. In fact he states in his afterward that he was shooting just for that feel. Being a fan of the 80s horror boom, this was a awesome change compared to some stories today.

I do not want to give any spoilers, I want everyone to be surprised on this roller coaster ride of a narrative.  The characters are all well fleshed out, with just enough background for us to care about them, but not so much as to feel overburdened. The tension and feel of oncoming doom makes you turn page after page without wanting to stop. I often sit and tell myself that I will stop after I get to a slow spot and pick up later, well during the 2nd sitting with this book i couldn't stop. As I turned the last page, let out a silent "wow" and looked at the clock, which somehow had advanced to 3am.

The wicked contains all the scares, blood and sex we could ask for and presents it in a way we don't see to often anymore.

I received this copy from The Nocturnal Readers box and is stated as Revised and Expanded. It makes me want to search out a copy of the original and compare the differences. There are also some very cool illustrations scattered throughout and a bonus story at the end.

I cannot recommend this book enough. It is available on Amazon and other booksellers.

So get cozy, read it in a dark room with just your reading light on and try not to flinch at any strange noises in the night.