THE WICKED ONES by J.Z. Foster 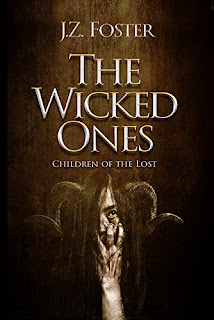 THE WICKED ONES  by J.Z. Foster

It's all gone. You're safe.

It's not like they could crawl out, creeping from your mind with long, slender fingers and milky yellow eyes sunken into heads with pointed horns bursting out.

Daniel Tanner's life is insane. A mysterious disease came to claim his son, seemingly pulling him into the grave with cold fingers named misery and hopelessness.
Now a stranger has come calling with an even stranger tale of monsters--horrible things that take children in the middle of the night and leave their own, things that crawled out of the fairy tales our barbarous ancestors used to tell, things that they tried to warn us about.

Because monsters aren't real, are they? There's no reason to fear the dark, no reason at all to believe the old tales about creatures with a taste for human meat.

J.Z. Foster is a fairly new author. His first book, WITCH HUNTER was released just last month on January 9th. This book, THE WICKED ONES releases on February 13th, and his next book MIND WRECK has a release date of March 13th. That's 3 books released in 3 months. These are not novellas, but full length novels. Not many authors can pull that off.

THE WICKED ONES does not suffer from the dreaded sophomore slump. This is a deep story that deals with love, loss and oh, so much horror.

The main character Daniel could be the normal everyman, thrust into extraordinary situations after the sudden death of his son and the strange new world that the chain of events bring him into.

J.Z. Foster knows how to build characters. Every person is fleshed out and belongs to the story. Just enough back story is given, without being overwhelming. You become vested in these characters and what they are going through.

The tension builds from page one. This is one of those stories that does not let you put it down. I would find myself at the end of a chapter, saying to myself, it's time to stop, but then I would keep  reading. I would get that gut-punch from a horrific event and just keep reading. Basically 370 pages in 2 days. And when I reached that last page, the ending was satisfying, I didn't feel cheated. But I wanted more. I just didn't want the story to end.

There is so much I would love to discuss about THE WICKED ONES, but then there is the chance of spoiling the story for someone else. This is a fast-paced, visceral novel that shows us the power of a fathers love and the horrors that exist just outside corners of our vision.

J.Z. Foster writes like a mixture of Brian Keene and Raymond E. Feist. With this just being his second book, I see the author becoming a mainstay in the world of Horror.

You can order THE WICKED ONES on AMAZON.

And you can order his first novel WITCH HUNTER HERE.

For more about J.Z. FOSTER you can visit his website HERE.