EAT THE RICH by Renee Miller 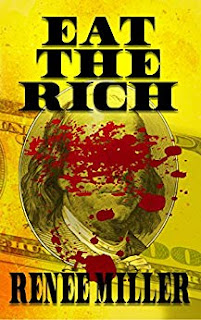 EAT THE RICH by Renee Miller

Renee Miller has written a story that fits perfectly into the time and political climate that we are living in. Now before you get turned off by the word "political" know that Renee does not push a political view or even state any specifics, it is just that the story itself lends to the state of our nation in a whole and the drastic measure it could possibly take to change it.

Our main character Ed Anderson is really kind of an ass. He decides to leave his upper class job, his wife and really his whole way of life to just disappear into the sea of homeless that populate the city. Befriended by another Gopher, another homeless man, Ed slowly discovers a mysterious plot unfolding in the city. People are disappearing, mainly the wealthy, with only a pile of bones remaining at the crime scenes. What do the new residents of a large tent city on the outskirts of town have to do with it, and what part will Ed play in their plans?

Renee gives us a re-imagining of the "alien invasion" story line, with just a touch of gore for the horror fans. Will these invaders lead us on the road to a new utopia where everyone is equal, or just exterminate the lot of us?

This is a very fast-paced story. Our three lead characters Ed, Gopher and Det. Marin are given just enough back story for us to connect with them, although Ed is not a likable person at first, but your view of him will change as the story progresses. The invaders are ruthless, and sometimes comical as they try to adapt to our ways in their attempts to fit in and go unnoticed. Again, do we fear these invaders, or cheer them on as they go about the destruction of the wealthy? Would our world be better off with everyone equal? These are questions you will ask yourself as you read.

There are a few story aspects that I really wish would have been explored more, but overall this is a really well written story and a fun weekend read. I look forward to what Renee Miller will unleash on us next.

I also wanted to give a quick shout out to the marketing department at Hindered Souls Press. I received an ARC of this book and it came delivered in its own medical specimen bag. 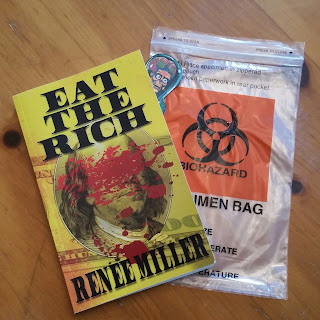 You can purchase EAT THE RICH in ebook and print on AMAZON.

To learn more about RENEE MILLER and her other works visit her WEBSITE.

And make sure to visit HINDERED SOULS PRESS to learn about all their other great books.