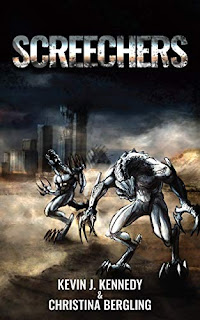 I have to admit that I went into SCREECHERS expecting another post-apocalyptic creature feature. And while it is that genre, it offers surprisingly more.

The world has been ravaged by an unstated apocalyptic event, and beasts have mutated to the new surroundings. One of these creatures is the Screecher. An intelligent killing machine that believes it is the last of its kind. It sets off from its home in a destroyed city to explore the world around it, not knowing that the is one more, younger, Screecher left alive. There are many dangers in this new world, Apoc-wolves, large crab-like creatures with stingers (think CLICKERS) and an unknown new discovery to the Screechers, humans.

Three survivors from a destroyed human community set off into the barrens to try and find a new home. Little do the know that the perils they encounter will bring them face-to-face with the Screehers, and the outcome will change their lives forever.

This is a great creature book with some outstanding monster battles throughout, including a very impressive and bloody final battle. The author's manage to give the creatures personality, so you are not just given a mindless killing machine, but a beast that thinks and reacts in ways that don't just rely on force.

Kevin Kennedy and Christina Bergling have crafted an entertaining, exciting, frightening and yes at times touching tale of life in an apocalyptic world. This novella is perfect for a fun weekend read.

SCREECHERS can be purchased in ebook and print on AMAZON.

You can learn more about Kevin J. Kennedy and his other works on his website HERE, and Christina Bergling at her website HERE.