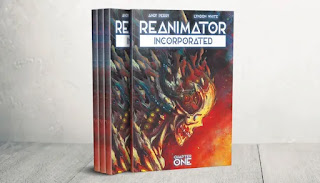 Reanimator Incorporated - A Lovecraft-inspired Graphic Novel
by Andy Perry & Lyndon White
Kickstarter campaign ends June 17th at 1pm EST.
The other day I was flipping around Kickstarter. I do this from time to time to see if I can spot any new comics or books that grab my attention. So on this day, as I go page to page, suddenly the word "Reanimator" catches my eye.
If you are a horror fan like me, the mention of Re-animator brings you memories of the classic movie of the same name from 1985, which in itself was a tale from the H.P. Lovecraft. The story of a young scientist Herbert West and his quest to understand death.
Now to me the movie (ok, maybe the 2nd movie to) are classic and to this day remain one of my favorites to watch over and over again.
So back to Kickstarter. After seeing the name pop up in the thumbnail, I had to click on it and see if it was really a adaptation of the classic Lovecraft character. To my surprise it was, and so much more.

Written by Andy Perry and Art by Lydon White, Reanimator Incorporated is not a retelling of the tale, it is a re-imagining. This tale takes place in modern day. Gone are the dimly lit labs and basements, for Herbert West is a man of technology and his new gleaming machines of science surround him. This is West for the 2020s. The obsession to understand and beat death is the same, but now we have corporate greed and family struggles added in to make the story even more complex. 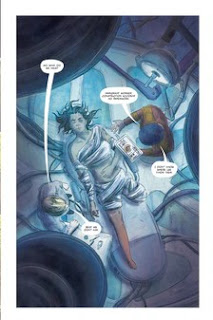 I had the pleasure of reading the complete Chapter 1 and it was a well written, fast-paced tale that left me wanting more. There are some very visually striking panels and it was fun to see little nods to other Lovercraft themes in the story. This is a well crafted story of life, death, rebirth and the dark things that live between.
The Kickstarter has been fully funded, but you can still get in on it until June 17th
The book is available in softcover and a special hardcover edition.
Kickstarter: Reanimator Incorporated