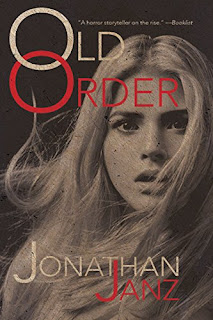 
Horace Yoder thinks he's got the perfect scam. All he has to do is pretend to have been kicked out of an Amish order, get a job on a local farm and when the family is asleep steal their valuables and resell them for a tidy profit. Unfortunately for Horace, the family has other ideas...and their plans are MUCH more sinister.

I first read this story about 5 years ago. A friend of mine had read it and then called me saying..(in these exact words.."Dude, ya gotta read this short story. It's like a gruesome Amish nightmare".) If I remember correctly the original ebook cover had a old barn on it. I just happen to live in Amish country. The local store has racks of what is referred to as Amish Romance titles. If this book had been on the rack with it's title and a barn cover, it would have been purchased by some poor unsuspecting little old lady looking for her strange Amish love story fix.  And that would have been a total shock to the poor reader.

This is as far from that as you can get. The main character Horace Yoder (a very common name around here) is a con man disguised as a shunned Amish man, in hopes of fleecing unsuspecting country folk of their valuables. But in the case of his latest target, he has bitten off more than he can chew.

Written at a breakneck pace, Janz keeps us moving along from encounter to encounter. You keep wondering what will happen next, and most of the time it's not what you suspect. Janz gives us a stunning story with as much sex, tension, scares and surprises as you could ask for.

This reissued version has a new afterward by the author where he talks about the original publication of the novel and the problems that arose from the a fore mentioned Amish Love Story community.

If you are a fan on the late Jack Ketchum or of Edward Lee, this is a story you will want to read.

And to think this was one of Jonathan Janz first published works.

I just need to add on a personal note. I have had the pleasure of meeting Jonathan Janz on several occasions. In my opinion he is one of the nicest guys in the writing business. He takes time to talk with his fans, and even those who were not. One year at Horrorhound he even spent about 30 minutes just talking with me about old houses and building a at home library.  Truly a class act.

OLD ORDER can be purchased for only 99 cents HERE

To learn more about Jonathan Janz and his works make sure to visit his website HERE and sign up for his newsletter.