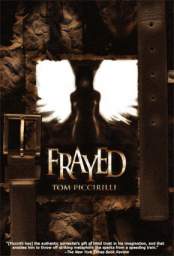 "Are you the one who helped him kill the angel?"
Twenty years of repressed anger and memories. A bitter knot of hatred that binds and divides two friends. The dark secret that fuels and devastates them both.
"He killed it. I only helped him to bury it."
Eddie's doing his best to get by, but every day the good fight just gets harder. And now there's a new burden to shoulder. Gray - his best friend and nemesis in literature, romance, and life - has landed in a bizarre mental hospital, known for its radical treatments, because Gray couldn't bear the weight of an unspeakable trauma.
The last time they met, Gray almost killed Eddie, but it seems that all is finally forgiven. Tonight, there's a wild hootenanny up at Gray's house.
The nuthouse.
And Eddie's invited.

Last night on The Horror Show with Brian Keene, it was announced that Camelot Books would be setting aside 25 copies of the late Tom Piccirilli's novel Frayed. 100% of the profits from the sale of these 25 copies will go directly to Tom's wife.

There are still some copies left. Get yours now and know your money is going to such a great cause. Thank you Camelot Books for such a kind gesture.

They are going fast. Get your copy HERE