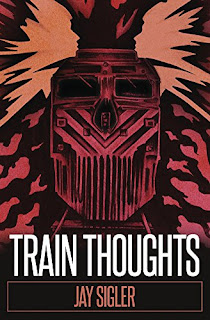 It's always a little strange when you read a book and there is something in the main character you can relate with. One of the main story elements in the book is that the main character rides the train every day to work. In these long rides he has what he refers to as his "train friends".  People he does not really know, but makes up names and stories for them since he is with them and watches them everyday. I have to admit that I kinda did this same thing. I rode the train everyday 1 hour and some change into Chicago for 3 years. In those rides you get to know people who ride with you. Maybe not by name, but by where they sit, when they get on or how they behave. It was just something to help pass the time. And you often find yourself wondering about them if they don't show up one day.

(quick note, to avoid any spoilers I will not be using the main characters name)

TRAIN THOUGHTS is a fast-paced psychological thriller that pulls the reader into a world of paranoia and spiraling madness.

The book opens with our main character reeling from the violent death of his wife from an unknown attacker. His world slowly starts to fall apart as he falls into a pattern of grief and drink. His only daily refuge being the time he spends riding the train to work and seeing his "train friends". But even that starts to crumble as a mysterious figure enters his life and turns his world and that of his "train friends" upside down. Could this mysterious newcomer be a danger to them all, and could he somehow be connected to the death of his wife?

Jay Sigler delivers a very impressive debut novel. I do have to say that if you are in a down mood, do not read this book. There is no happiness to be found here. The author gives us a main character that is suffering a tremendous loss and does not know how to deal with it. Alcohol becomes a escape method and begins to help unravel his life. Jay does a wonderful job of conveying the anguish of the main character, and later as the story progresses, how that changes to anger and violence. There are some horror elements to the story, and mostly appear in some very descriptive dream sequence. If you are a gore fan, these parts of the story will make you very happy.

There is very solid writing, and the pacing is well thought out. This is a very character driven story. You cannot help but feel sorry for the main character. The story moves along quickly and comes off delivering a truly surprising and shocking end.

You can purchase TRAIN THOUGHTS in print and ebook on AMAZON.

You can learn more about JAY SIGLER and his work HERE.