THE SWITCH HOUSE by Tim Meyer 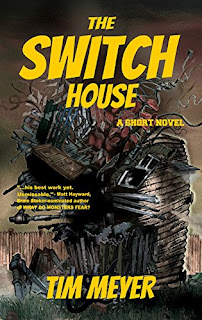 THE SWITCH HOUSE (A SHORT NOVEL) by Tim Meyer

CONGRATULATIONS! You've won a role on LET"S SWITCH HOUSES! Your life is going to change. We promise. Your dreams will come true. Everything you've ever wanted, we have it. This is a chance of a lifetime. Come Inside. Switch with us.

Angela and Terry return home after several grueling months of filming the popular television show LET"S SWITCH HOUSES!, only to find their residence in ruin. Sure, the decor and framed photographs are the same; the color of the walls hasn't changed; the furniture sits unmoved. But something is off. Their quiet New Jersey home feels tainted. Angela can sense it. Crawling inside her. Infecting her mind. Poisoning her thoughts.

Angela and Terry are a couple still reeling from a "tragedy" that occurred in their lives. In hopes to help their failing  marriage they agree to go on a reality show where they "switch houses" with another person. After the show is over they return to their home, but to Angela it does not feel right. She is already seeing a psychiatrist , and she cannot tell if what is happening at her home is real or the result of mental issues. What's really happening in the home, and what occurred there while they were away living in another house. And how does it all tie into the "tragedy" that they refuse to talk about.

Tim Meyer's is no stranger to horror. I have read a few of his past books, but somehow this story just feels more personal. The story has a small cast of characters and keeps itself centered around the couple and their home. It is the tale of a marriage on the rocks, loss, terror and the uncertainty of someone with possible mental illness. The story is quick and well paced out. The character of Angela is very believable. She is not sure what is going on and what might happen with her and her husband. The dreams or hallucinations she has range from the small, somewhat childlike, to horror on a Barkeresque level. It also touches on the "reality show" world we all live in now. What could really happen if someone else lived in your house for a month. Do you really know what goes on.

Another aspect of the story is the mentioned "tragedy" that occurred. Slowly through the story more and more is revealed.  (But not here)

I do have to admit I had a hard time at the end of this story. Not because I didn't enjoy the story, no quiet the opposite. The story flows and is pretty much non-stop from beginning to end. The problem for me was one single act that occurs toward the end that will just tear your heart out. It is a act that is so horrible that you just have to stop and let it soak in, especially if you are a parent. I sat for a few minutes after reading it and then continued on. I was not disappointed with how the author tied it all up in the end.

THE SWITCH HOUSE gives us a story of horror mixed with a very tight psychological thriller that will keep you guessing till the end.

You will not want to miss this one.

As a bonus there are 3 short stories included in this edition. My favorite being "How to Kill a Bear with a Bow and Arrow".

You can preorder THE SWITCH HOUSE in print and ebook on AMAZON.

You can learn more about Tim Meyer and his other works HERE.