WELCOME TO THE SHOW edited by Matt Hayward and Doug Murano 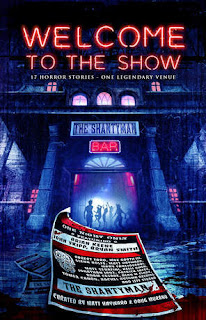 WELCOME TO THE SHOW - 17 Horror Stories -- One Legendary Venue

I have read several anthologies so far this year, and hands down WELCOME TO THE SHOW has been the best. Doug Murano has pulled together a who's-who of the top writers around today to weave an unforgettable narrative around the fictional showroom, The Shantyman.

This collection of 17 unique stories has something for everyone. Ghosts, demons, time travel, vampires, curses, rips in the fabric of space,,,it is all here. You might think, "how can all these types of stories fit together?". Well they do, and terrifically at that. Each story seems to build off the one before it. Every story either begins or ends at The Shantyman, a venue that has hosted many of Rock n Roll's elite through the years. A place that has a notorious history for strange events, starting in the early parts of our century and into the near future.

Let's take a look at the stories that are on stage at The Shantyman.

What Sort of Rube by Alan M. Clark
One of the earliest tales of The Shantyman. A warning is given to a musician, but will he heed it in time to save his life?

Night and Day and In Between by Jonathan Janz
A private eye gets more than he bargained for when he tracks a missing girl to The Shantyman.

In The Winter of No Love by John Skipp
1969 in San Fransisco. One girl's journey is about to change in ways she never expected.

Pilgrimage by Bryan Smith
Three friends learn that time and space work differently in the shadow of The Shantyman.

A Tongue Like Fire by Rachel Autumn Deering
Hexx, a singer with a dark message, gets more from an interview than she expected.

Master of Beyond by Glenn Rolfe
Ouiji boards are never a good idea, especially at The Shantyman.

Dark Stage by Matt Hayward
Fred is ready to retire from The Shantyman. That is, until he encounters a man in black on open-mic night.

Open Mic Night by Kelli Owens
Can the legendary "27 club" be true. Some of  the biggest rockers in history all died at age 27. One visitor to The Shantyman may be involved.

Beat The Past by Matt Serafini
Moira and Pete at at The Shantyman to see Brainpan, a band that disappeared after their last concert 10 years ago. Pete's perception of the world around him is about to change.

True Starmen by Max Booth III
A strange podcast with an even stranger audience is about to take place at The Shantyman.

Just To Be Seen by Somer Canon
A girl, a musician, and a kiss. A young fan would do anything for the artist she loves.

Parody by Jeff Strand
Zany Chester longed for his chance to make it big. The stage of The Shantyman was just the place.

Ascending by Robert Ford
Nazir thought he would be meeting the girl of his dreams in San Francisco. Sometimes a promise of love is hard to keep.

The Southern Thing by Adam Cesare
A super fan of the Southern Rock band The Truckers wishes he was a more "authentic" fan. An encounter at The Shantyman just might give him that chance.

Running Free by Brian Keene
A Made Man is dying from cancer, but that is not the way he wants to go out. A visit to The Shantyman might be what the doctor ordered.

Just a quick word about this story. If you are a fan of Brian Keene this story will be a stand out for you. Brian brings his own mythology into that of The Shantyman. A key character from Brian's mythos makes an appearance and several other works are referenced. Also several characters from earlier stories in this anthology pop in to say hi.

and last, but definitely not least....

We Sang In Darkness by Mary SanGiovanni
Mary SanGiovanni closes out this anthology with a tale about what would happen if music broke the world. Some friends visit The Shantyman one last time and find a frightening surprise.

You can read through this entire book and not think that you are reading a collection of various stories. Each one builds off the last. Events carry over and are mentioned in other stories.  The Shantyman is not just a building, it is a living, breathing entity that pulls all these tales together.

My hat is off to Doug Murano for putting together this amazing collection of work and to Crystal Lake Publishing who is quickly becoming the go-to publisher for top-notch anthologies. (Lost Highways, C.H.U.D. Lives, Behold and more)

So pull on your leather jacket, grab a beer and push your way through the crowd. The show at The Shantyman is about to begin and you will want to be in the front row.

You can pre-order WELCOME TO THE SHOW on AMAZON.

To learn more about Crystal Lake Publishing and their other fine books, make sure to check them out HERE.