OUR LADY OF THE INFERNO by Preston Fassel 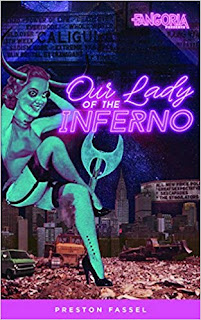 OUR LADY OF THE INFERNO by Preston Fassel

At twenty-one, Ginny Kurva is already legendary on 42nd Street. To the pimp for whom she works, she's the perfect weapon-- a martial artist capable of taking down men twice her size. To the girls in her stable, she's mother, teacher, and protector. To the little sister she cares for, she's a hero. Yet Ginny's bravado and icy confidence hide a mind at the breaking point, her sanity slowly slipping away as both her addictions and the sins of her past catch up with her...

At thirty-seven, Nicolette Aster is the most respected woman at the Staten Island Landfill. Quiet and competent, she's admired by the secretaries and trusted by her supervisors. Yet those around her have no idea how Nicolette spends her nights-- when the hateful madness she keeps repressed by day finally emerges, and she turns the dump into a hunting ground to engage in a nightmarish blood sport...

He need not worry though. Preston has delivered an amazing detailed story, filled with characters that jump off the page.

Yes, the story does drag at some points. There are some long stretches of nothing happening and an abundance of run-on areas, but the core of the story is good. Don't stop reading if you hit that wall, it will pick up. The characters are well fleshed out and are very believable, especially in the time period of 1983. These are two strong female lead characters. Ginny and Nicolette are both predators, just at different ends of the spectrum. Ginny will be fierce to protect her family and Nicolette will be savage in pursuit of her beliefs.

1980's New York is brought to life in all its bright lights, dark shadows and grime. The famous 42nd street, The Deuce, is a place of fantasy, desire, lust, greed and for some, death. This is where Preston shines, in creating, or in this case, recreating this point in time and populating it with a host of believable characters.  I especially liked the character of Ginny. She is not a hero by any means. In fact she does some down-right horrible things through the course of the story. But what she does is for self preservation and to care for her sister. She is an empowered woman who knows what she wants and how she will get it.

There is no supernatural undying slasher to be seen in this story, no ghosts or zombies. The monsters in this story are people. Nicolette in her quest for sport, blood and savagery. The Colonel with his need for utter control and wealth. And Ginny, savage in her own right, still a monster in some eyes, but of the three she shows compassion for others besides herself. Everything here is based in the real world. People suffer. Whether hooked on drugs, forced into prostitution or hunted by a mad-woman, they are all fighting just to survive day by day.

I would say that I was expecting more of a horror feel to the book, being that it is the first release from Fangoria Presents. To me it reads as a great thriller, not a horror story. There is violence and blood, especially as you near the climax of the story. In the end it all comes down to the reader him or herself. Some will look at it as horror, others will not. But it is a story that you do not want to miss.

You can pre-order OUR LADY OF THE INFERNO on AMAZON.

You can learn more about PRESTON FASSEL by visiting his page on FACEBOOK.