THE SIREN AND THE SPECTER by Jonathan Janz 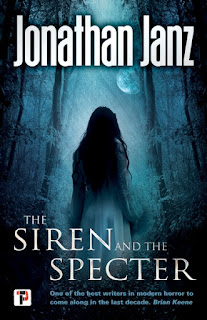 THE SIREN AND THE SPECTER by Jonathan Janz

I am just going to say it right off the bat, I love this book. Back in April 2018 I was lucky enough to receive a copy of the book from Jonathan to read. I was blown away from the first page and finished the whole book in two sittings.

Then the hard part came. I COULDN'T TALK ABOUT IT!!

The publisher, Flame Tree Press wanted to keep it quiet until it had the opportunity to produce the ARCs and get them sent out. I had just read this great book and could not share it with anyone except my wife. Who, as strange as it is because she lives with me, hates scary stories.

When the ARCs arrived I reread it.  So needless to say I have been running this review over and over in my head for several months, wondering if I could do it justice. Hopefully I can.

Over the many, many (and still many), years I have been reading horror, I have read hundreds of ghost stories. Haunted houses, haunted cars, heck I can even remember one of a haunted ski lift. There have only been 3 that I truly think are the best Ghost Stories ever put to paper. (These are my picks, yours may vary.)

They are THE SHINING by Stephen King, THE HAUNTING OF HILL HOUSE by Shirley Jackson and GHOST STORY by Peter Straub.  Now I need to add a fourth to that list. THE SIREN AND  THE SPECTER by Jonathan Janz is that good. Now I know some are probably saying "But those are classics", and yes they are. But they didn't start that way. Once upon a time they were a new release just like THE SIREN AND THE SPECTER. It's the readers who raise the book to that status, and I don't see anything standing in the way of this one quickly rising to a modern day classic..

I don't need to go to far into a description of the story. You can get the feel from the description at the beginning of this review taken from the book cover. And too much information could let loose a spoiler which I do not want to happen. The author creates some truly frightening moments throughout the book. Many will have you on the edge of your seat and making sure some extra lights are on around you.

The Alexander House is as much a character in the story as David, Anna or any of the others. Jonathan makes it feel alive, threatening and very, very deadly. The author's ability to build a totally convincing world will draw you in. Not just the Alexander House, but the area surrounding it, the forests, the lake. You feel like you are there. Which is not bad during the few quiet moments, but others will just make the hairs on the back of your neck stand up.

If you have read any of Jonathan Janz's other works, you know that he is a master at creating characters. Here his expertise is on show again.The main character David Caine is a skeptic, he is here to debunk Alexander House. But when things start happening his beliefs start to waver. Here is where he becomes such a believable character. Unlike some stories where the hero hears a noise and runs into guaranteed danger to see what it is, David is not afraid to just run. That is what most of us would do in that situation. You have a bad feeling about something, you don't rush in head first. This is David's reaction. He is wary, he is cautious, and he knows when it is time to beat feet and head the other way. As the story progress, so does David. His character becomes stronger, more sure.

Every character that the author has created here feels alive and believable. From the smallest part to the main players. He connects you to each one, you worry about them, you cheer for them and in some cases you despise them. But no character is wasted. There are no throw away parts here, each person has a role to play as the story barrels to it's shocking conclusion.

This book is sure to be on everyone's Top 10 list this year and for years to come.

With THE SIREN AND THE SPECTER, Jonathan Janz has firmly cemented himself in the role of master storyteller.

You can order THE SIREN AND THE SPECTER from AMAZON.

To learn more about JONATHAN JANZ and his other works, and for news and updates, visit his WEBSITE.

To learn more about FLAME TREE PRESS and all the other great books they have coming out you can visit them HERE.