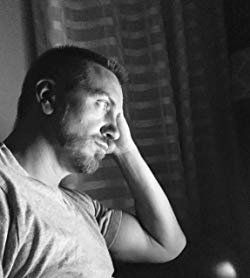 Hello Jonathan. Thank you for giving me some time out of your busy schedule to do this interview for One-Legged Reviews.

You have written over 15 books and numerous short stories, and have become a inspiration for many new authors. Who was your inspiration when you started writing.

My inspiration to begin reading back when I was a painfully insecure fourteen-year-old was Stephen King. The inspiration for my disastrous first attempt at writing a novel at age eighteen was Stephen King. Along the way, there have many attempts and failures, but the one common denominator has been Stephen King's insistent implicit inspiration. It makes me sound like a loon, but I always go back to how he made me feel as a reader then and now and how powerfully the urge is inside me to help others feel the same way. So...yeah. Stephen King.

You are pretty prolific when it comes to releasing books. How hard is it to balance family and work and still have time to write.

Here I'm going to reference another one of my favorite writers, Mr. Joe R. Lansdale. Joe pretty much says that if you want to be a writer, you'll make time for it. I believe that. That means making sacrifices. When I have the chance, I'm with my family. I spend a good deal of time as a teacher. But if I'm not doing those two things, you can bet I'm writing, reading, or editing. That means I don't watch TV, don't hang out with friends, don't play video games by myself, and I don't spend afternoons on the golf course. I'm not suggesting this is health or right for everyone, but it's how I make it work. I write because I want to and because I'd probably die if I didn't. As Joe says, you make the time for the things that matter to you.

I know that many fans, including myself, are excited for the re-release of many of your out of print books. For many newer readers this will be the first time they will be able to read these older books.

Yes! I'm so excited about this! It has been interesting going back through the manuscripts and reacquainting myself with these novels. I'm a different writer now that I was in 2012, but I'm still proud of what I wrote back then. I can't wait for folks to get a look at these eight backlist titles, which were published between 2012 and 2015. They represent some of my favorite stories.

Every author has one book that they wrote that will always be their favorite. Which book is that for you?

Of my currently published works, I'd say CHILDREN OF THE DARK, THE NIGHTMARE GIRL, and WOLF LAND would probably be at the top. This sounds like salesmanship, but the truth is, I like all the new stuff I have coming even more. THE SIREN AND THE SPECTER, THE DARK GAME, NIGHTMARE WORLD, THE DISMEMBERED, CHILDREN OF THE DARK 2, and my current work-in-progress, MARLA, are all stories that are better than what I've written before. That makes me very excited about the future.

Many authors use a "non de plum" when writing. Dallas Mayr was Jack Ketchum and Stephen King used Richard Bachman. What was the inspiration for Jonathan Janz?

As a teacher, I want to be very careful about my reputation. The vast majority of people would celebrate the fact that I put into practice everything I teach and would be delighted that I'm a novelist as well as a teacher. However, I also worried, early in my career, that there would be people who'd conflate the stories with the person, hence the creation of the nickname. My actual first name is Jonathan, so that part was easy; the Janz is my mother's maiden name, so using it was a way to honor my grandma and grandpa, who helped raise me and who have been instrumental in my life.

This September we will see the release of your newest novel, The Siren and the Specter. Many early reviews are calling it one of the top books of the year. Can you tell us a little about it.

Yes, the early word has been amazing. Becky Spratford, writing for the Library Journal, said it really well: "A terrifying tale about a haunted house and the deeply haunted man who is challenged to spend a month there." In addition to the supernatural elements of the plot, the book is about how people use others' innocence against them, the corruption of that innocence, and the possibility of redemption even when redemption seems impossible. I love the book and hope others do too.

At the time of this interview we are only 2 weeks away from the Annual Scares That Care Convention. Is there anyone you are looking forward to meeting this year.

So many! Here are just a few: Dan Padavona, Rio Youers, Elizabeth Massie, and Christopher Golden. Dan and Rio have become online friends, so I'm excited to interact in person. I've been a fan of Elizabeth's since I read "Abed," which is one of the most powerful stories written in the past twenty years. I've known of Christopher for a long time, but I'm just now starting to read him. SOULLESS is his zombie novel from a few years back, and at about 25% in, I can confidently state that he is an outstanding writer who deserves all his success. It'll be great to meet him and Elizabeth.

Speaking of conventions. Any plans to possibly return to HorrorHound Indy. It is right in your backyard.

I'd like to. It gets complicated because of my kids' schedules. If they have something going on during a weekend, I want to be there for that. So...not yet, but eventually, yes, I'd love to get back to HorrorHound.

I could not do an interview without bringing up Old Order. This is one of your earlier stories and probably has some of the most outrageous 1 star reviews because people mistook it for an Amish romance book. What did you think when those started rolling in?

Hah! Yes. That was a notorious moment in my early career. I think the best part about it is the fact that I can laugh about it now. And who would've thought it? I would have guessed that aficionados of Amish romance would have eaten up a twisted thriller about a thief, sex, and murder.

Thank you again for your time and I look forward to the release of The Siren and The Specter and for what you have waiting in the wings for us all in the future.

Thank you for having me on, Jim. It has been a blast getting to know you online, and I'm proud to call you a friend.


You can order THE SIREN AND THE SPECTER in ebook and print on AMAZON.

Make sure to stop by Jonathanjanz.com for more information on the author and his works. And take a moment to sign up for his newsletter while you are there.
By Jim Coniglio at September 05, 2018

Email ThisBlogThis!Share to TwitterShare to FacebookShare to Pinterest
Labels: Interviews