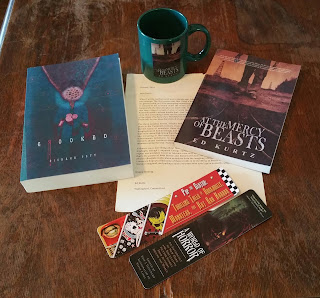 Twitterstone promised that its inaugural box would arrive on Halloween, and there it was, sitting on my porch the afternoon of Oct. 31st. This is no small task for a new service and definitely helps build trust with its subscribers.

So lets take a look at each item included in the box.

The box contained 2 books. Book #1 is AT THE MERCY OF BEASTS by Ed Kurtz.
Published April 2018 by Journalstone 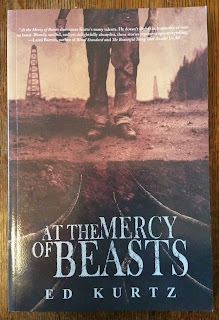 From the author of Bleed and The Rib From Which I Remake the World comes a triptych of historical horror novellas. A pair of Texas oil men strike something more valuable than crude that turns avarice to murder—and summons something that should never have been awakened—in “Black’s Red Gold.“ In “Kennon Road,” a disillusioned American corporal stationed in Baguio in the wake of the Philippine-American War discovers the gruesome truth behind the Filipino legend of the man-eating Manananggal. And on the lonesome desert highways of the American Southwest, a trucker befriends a haunted, hitchhiking Vietnam veteran with whom she confronts the horrors waiting in the hills and caves to feed in “Deadheader.” Monsters both human and otherworldly converge in Ed Kurtz’s At the Mercy of Beasts.

BEASTS is a fairly new book and is a collection of 3 novellas by Ed Kurtz. Stories included are BLACK'S RED GOLD, KENNON ROAD and DEADHEADER. And to my surprise the copy I received was signed by the author. 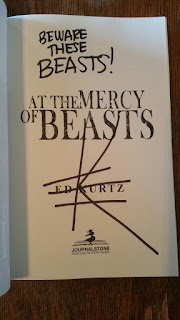 You can read more about the book and purchase it on the Journalstone site HERE or on AMAZON. 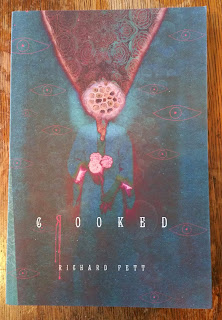 Weird steampunk horror—corpsepunk!—set in a pseudo-Victorian, otherworld city called Brine: a wretched labyrinth of impossibly tall, crooked spires and filthy waterways, maintained by its indentured undead citizens, and powered by the massive waterfall it precariously dangles over.

The story is a brutal, phantasmagorical murder mystery, meandering through the city's monster-infested nightmares, a stylistic cross between the Cthulhu Mythos and Sherlock Holmes, a disturbing visit from Frankenstein's monster to Alice's Wonderland, and... well, where should I begin?

This book I was not familiar with, but after reading the book tag and some other reviews, it is definitely going onto my TBR stack.

You can read more about the book and purchase it on the Broken Eye Books site HERE or on AMAZON.

To round off the box were a few filler items. 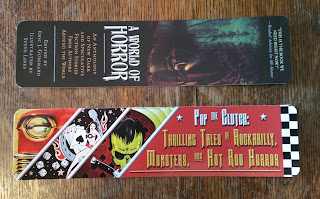 And a coffee mug (well, for me it's for tea) with the cover art for AT THE MERCY OF BEASTS on it. 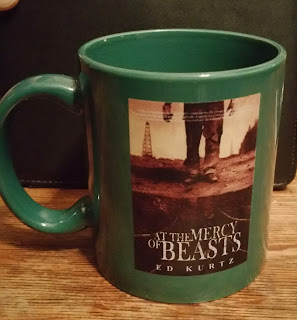 Overall I was very happy with the box. I know that the curators had stated they were rushed with getting the first box out and have more plans for box #2.

As for Box #2, which has a shipping date of December 22nd, Twitterstone has announced the theme as "WOMAN". A box containing books by female authors and items created by female artists. Again it will contain 1 Journalstone published book and 1 from another small press.

I look forward to the next book and to see what adventures Twitterstone  takes us on in their coming months.

There are still a few of the October boxes available for order and the new December box can be pre-ordered at the Twitterstone website HERE.