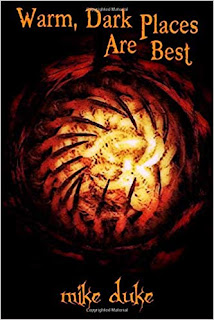 WARM, DARK PLACES ARE THE BEST by Mike Duke

Carl and Jessica are emotionally stretched thin, down on their financial luck and stuck moving into a really nasty apartment complex after Jessica gets laid off and Carl is already on a fixed disability payment.

From day one they see lots of roaches in the hallways but nothing in their own apartment. Hoping their luck will hold, they have no idea just what kind of hell is coming their way or what hideous secrets their apartment, in particular, holds.

Bugs, no matter if they are big or small, most people will have an aversion to the creepy crawly things. In WARM, DARK PLACES ARE BEST, Mike Duke has taken one of the worst of the insect kingdom and unleashed a story that will have the reader sleeping with the lights on for weeks after reading it.

I have to remain vague in some areas of the story because I want the reader to be surprised as the events unfurl. Jessica and Carl are a young couple that have just moved into a low rent apartment. Carl is on disability and Jessica is in search of a job to help make ends meet. They are not happy about their new home, but they know that together they can hopefully make the best of it. That is, until the other residents of their small apartment make themselves know.

There are some parts of the story that will make the strongest reader squirm. And one part in general that had even me tensing up as I read it. If you have read any other works by Mike Duke, you will know that he is a very descriptive writer, and he does not hold back in this story. If you are a fan of the original Creepshow movie from 1982, you will remember a segment entitled "They're Creeping Up On You". For years that was the standard by which the bug gross-out was measured. In just a mere 67 pages, I believe that Mike Duke has set a new standard.

There is one drawback for me in this novella, and that is the characters of Carl and Jessica themselves. The author has shown that he can create fully fleshed out and believable characters, especially in his last novel LOW, but for some reason these two characters just didn't come off as truly believable to me, and for me as a reader that is important. Yes people react differently to stressful situations, that's what makes us all unique. But it was the characters apparent indifference to major (horribly major) events that take place that just pulled me out of the story for a bit.(Luckily this didn't occur until about 1/2 way through the story) Now remember this is my opinion on my read of the story. When you read it it could come across completely different to you.

That being said, the overall story is very good. It is fast paced, tense and truly disturbing.  I would strongly advise not to read this book at night while you are lying in bed.

Mike Duke has several novellas and short stories out and I would highly recommend picking up his latest novel LOW.
I look forward to his new novel coming in early 2019.

You can purchase WARM, DARK PLACES ARE BEST on AMAZON.