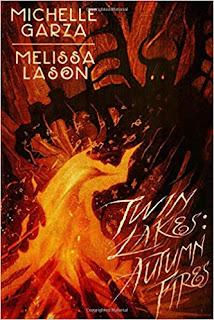 A Campfire in the distance should be a relief to a victim on the run, but instead, it signals darkness and the doorway to evil....

When Liz accepts a ride from a stranger, she ultimately becomes the victim of a heinous crime. After fighting off her attacker, she stumbles towards a campfire in the distance and onto the scene of a violent murder. The terror of discovering a decapitated young woman is only the beginning, as when the shadows begin to move, she finds that this new killer has set his sights on her. He wants her to share an autumn fire.

Michelle and Melissa, aka The Sisters of Slaughter, are back with a new novel full of blood, horror and lots of secrets.

Having read several short stories by the Sisters of Slaughter (from here on referred to as SOS), this is the first full length novel of theirs I have read. I was not disappointed. They have created a world filled with wonderful and frightening characters. It takes a good writer to make a world that the reader can almost visualize while reading, and here we have 2 authors working seamlessly to give us a great reading experience.

The story plays out like a really demented episode of Twin Peaks. Small town, eccentric and mysterious characters, mystery and secrets. In fact, this story would make a perfect TV show. The way the characters interact and the ever present mystery behind the group called "The Ancestors" that lurk behind the scene; I would tune in every week to watch this. Some TV channel needs to swoop in and pick this story up.

The story grips you from the first sentence and does not slow until the last page. The SOS have created some awesome characters. Some you will love and other you will just love to hate.  I think my favorite character had to be the Sheriff. I just loved the personality he was given and his actions throughout the story. The rest of the cast is also well fleshed out. Liz is a strong female lead and holds her own as the only "normal" person in a town full of witches, psychics, monsters and demons.

There is no shortage of blood in this story, and some scenes are down right gruesome. But it is not overdone, each scene connects to the story and is not used for just shock value. It was nice to see that the SOS used restraint in the overuse of blood and gore, and instead concentrated on giving us a great character-driven story.

I sure hope we get to visit the town of Twin Lakes again in the future.

You can purchase TWIN LAKES: AUTUMN FIRES on AMAZON.

To learn more about Michelle and Melissa THE SISTERS OF SLAUGHTER you can visit their page on FACEBOOK and their authors page on AMAZON.

And to learn more about SINISTER GRIN PRESS and all their other books visit them HERE.