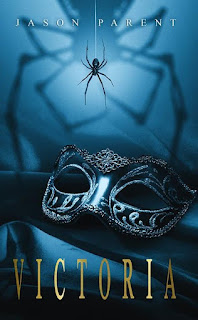 Just a quick note to the readers. This story takes place in the same shared universe as Jason's 2017 novel WHAT HIDES WITHIN, but you do not need to have read it to enjoy this story. VICTORIA is a stand-alone story. I would recommend picking up WHAT HIDES WITHIN for more spidery goodness.

I have never had a problem with spiders like a lot of people. If they leave me alone, then I will do the same for them. But spiders living in your head, and intelligent speaking spiders at that, well that's a whole different matter.

Jason Parent's new novel VICTORIA gives a a strong female lead who may, or may not be in control of her own destiny. This is because Victoria has a stow-away, a little spider named Chester who lives in her head. We are not talking about an imaginary friend here, no, this is an honest to goodness eight-legged freak living in her actual noggin. Chester has lived in Victoria's head since she was a child and has influenced her action for years. Teaching her to be strong and smart, a fighter and yes, at times, a killer. Victoria thinks of Chester as her friend and mentor, but Chester has much darker plans in mind.

The character of Victoria is a bad-ass, take-no-crap-from-anyone lead. She barrels through the story fists-flying, never letting anything thrown in her way slow her down. And boy, do some things get in her way. The author has created the perfect character. She is strong and determined and living in a world that is quickly spiraling out of her control.  But he does not let us forget that Victoria is still just a young girl longing for a sense of family and belonging.

Chester, our resident spider, is truly an evil being. For a spider, Jason has transformed the character into a believable and really frightening force. As a member of a race that has been around for centuries, Chester reveals just enough info about her race to keep us interested and guessing without bogging us down with too much lore.

One of the best things about this book is Jason's characters. The love/hate relationship between Victoria and Chester is great. Then add in a possible love interest and things get very interesting with all of it leading up to a totally surprising ending.

The story is fast-paced and exciting. It reads like an espionage thriller, mixed with The Da Vinci Code and sprinkled with spiders. I really enjoyed this book and hope that Jason Parent revisits the character of Victoria again in the future, and of course, brings us more history of Chester and her kin.


You can purchase VICTORIA in ebook and print on AMAZON.

You can learn more about JASON PARENT and his works HERE.