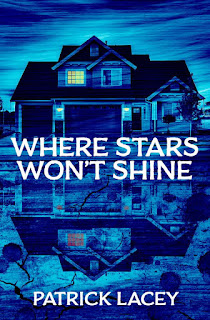 I'll be seeing you.

Tucker Ashton is a serial killer. He has murdered people from coast to coast, and then went on a killing spree in his home town of Marlowe, Massachusetts. After being caught he just disappeared from his cell and was not seen again. Most believe that Tucker is dead, or at least they hope he is. Four strangers will soon learn the truth as they are drawn to the town of Marlowe. What they find there will make them question their reality and their sanity. Can they survive Marlowe, and its dark starless night?

Patrick Lacey has given us a horrific, mind-bending story that will have you continually checking the dark corners of your room while you're reading. Tucker Ashton is a truly frightening character, brought to life (really almost too real) by the author's use of character building and interactions.  All the main characters are believable and well fleshed out. They are all given enough back-story for you to care about them (and of course hate others). The world the author has created for them is split in two. One side being your normal small home town, the other a perverted mirror image (think the upside-down from Stranger Things on crack). It is the author's ability to blend these two worlds into one constantly shifting narrative that makes this story so terrifying. At times you do not know which world you might be in.

But the star of this story is Tucker himself. A lot of his background is given through excerpts from an autobiography that was written by an author who died on the day of its release. At times you can almost feel bad for Tucker, he is a product of the hard childhood he was subjected to. I think one of the scariest aspect of the character is that he could be real. Kids see horrifying images on TV and the internet on a daily basis. This does not have adverse effects on all kids, but those that it does could lead them down a dark path. You see it in the news regularly. Just imagine this going on unchecked, then add in the loss of a parent and abuse at the hands of another; this is the world the author had Tucker reared in.

Another aspect of the story that I think was important that the author touched on was how the public views such horrors. There are websites dedicated to killers. Have we just become desensitized by it all? And there is, scary as it sounds, people who idolize these killers (as also shown in the story). By this idolization, do we give these "larger-than-life" killers more power than they deserve? Does the public's view and sometimes misguided support strengthen and help create theses characters? That is a whole other discussion that could go on forever. Let's just say that Patrick covers some of these questions in the story.  So along with the well crafted tale, he makes you really think about the world around you.

It also might instill in you a dreaded fear of potatoes.

I would highly recommend picking this book up to start your New Year off right.

So prepare yourself, Tucker Ashton has come home. God help us all.

You can purchase WHERE STARS WON'T SHINE in ebook and print on AMAZON .

To learn more about all their upcoming books please visit GRINDHOUSE PRESS .