AND HELL FOLLOWED: AN ANTHOLOGY by Death's Head Press 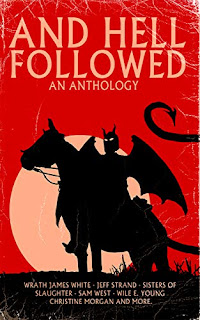 AND HELL FOLLOWED: AN ANTHOLOGY

AND HELL FOLLOWED is the first book from the new publisher Death's Head Press. They have pulled together an amazing group of authors who have all written short stories based on events from the Book of Revelations. Stories range from the first horn blast and the Horsemen to the final day and everything in-between. It can be read as a sort of primer as what and what not to do to survive during the Apocalypse.

THE WHORE OF BABYLON by Sam West
A horror author meets a mysterious woman in a bar and learns he may have unknowingly contributed to a coming apocalypse.

BEHIND BLUE EYES by Chris Miller
Jack has just lost the love of his life.  But he has no time to mourn as he hears the first trumpet blast.

This story is one of my favorites of the collection. Such a frightening and grisly view of the beginning of the end.

CENSERED by Christine Morgan
One of the lighter tales in the book. A rebel angel in God's court is very upset in his role in the planning of the apocalypse.

THE DAY AND THE HOUR by Wile E. Young
Four survivors during the end-time must now face the 6th trumpet blast and the horrors it unleashes.

THE OLD MAN AND THE LAMB by Patrick C. Harrison III
In a land ruled by the church, an old man encounters what could be the catalyst to the further destruction of the world.

APOCALYPSE... MEH by John Wayne Comunale
The apocalypse has come and it is not quite what people expected.

FALLEN by James Watts
175 years after the horseman's ride, one fallen angel meets a man who is connected to his death as a child centuries ago.

GODLESS WORLD by Michelle Garza and Melissa Lason
Four girls trying to survive during the end time. A video game and a promise keep them together.

This is a great little story. The Sisters of Slaughter give us a tale full of action and beasties, but still give the story a heart.

HAM AND PUDGE by K. Trap Jones
The story of two creatures, created by God to scavenge the site of the last battle between Satan and Jesus.

This story is just brimming with dark, dark humor and one of the best donkeys ever.

HORSE by Wrath James White
Could a new designer drug called Horse be the beginning of the Apocalypse? A drug dealer learns the truth as he tries to make his way home.

HELL PASO by C. Derick Miller
A portal has opened at the Mexican/American border and all Hell is coming through it. Two soldiers try to survive after one fires a shot that has just changed some very important preordained events.

CULT OF THE ANGEL EATERS by Mark Deloy
A man with the ability to see angels and then eat them for their powers gathers followers to teach them his ways and to prepare for the coming of demons.

SIX DEGREES OF SEPARATION by Delphine Quinn
Chips implanted in your body keep a running score of your life or social merit. Say or do the wrong thing and your score could drop and have very serious consequences. Two teens decide to change their lives and leave the city and their families behind, and say goodbye to the Six Degrees.

Another favorite in this collection. The mixing of the Mark of the Beast with technology was handled well. Read like a mix of Orwell's 1984 and the Black Mirror episode Nosedive.

THE UNVEILING by Hyane Sawbones
A wife and mother, distraught from the sudden death of her husband gives birth to a boy who may be something much darker.

MARK OF THE BEAST by Richard Raven
Something is wrong at Antioch Baptist Church, and the new Pastor seems to be the center of it.

OUTPOURING by Jeff Strand
Caleb awoke with a terrible sore on his back. Who would have thought the End could begin in a little apartment.

I have to say I really enjoyed this anthology. I have always been interested in stories about Revelations. Starting back in Catholic grade school when the nuns would use it in ways to scare the crap out of us kids. As with any anthology some stories are better than others, but none will leave you feeling disappointed. I would recommend this book to everyone.

Death's Head Press has put together a very impressive collection for a first time publisher. I can't wait to see what they have in store for us in the future.

The End is Nigh! Pick up this book before it's too late.

You can purchase AND HELL FOLLOWS: AN ANTHOLOGY on AMAZON.

To learn more about the publisher, please visit their site at DEATH'S HEAD PRESS.
By Jim Coniglio at January 14, 2019