AS SEEN ON T.V. by John Wayne Comunale 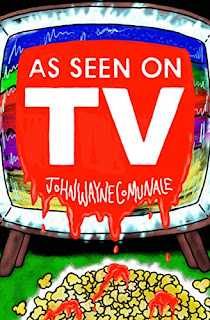 AS SEEN ON T.V. by John Wayne Comunale

I will have to be careful on talking about the story. There are some plot points I do not want to give away as spoilers. So bear with me as we jump around a little bit to keep this review spoiler free.

Artie, our main character, is a serial killer who also has a compulsive addiction to As Seen On TV items. His life revolves around the daily use of these gadgets and of course, his love of killing. Artie has a solid routine and it has kept him safe for many years, but suddenly something has changed and he finds his world upended by the appearance of a strange man. Events start to spiral out of Artie's control and he will begin to question the safety of his anonymity and his sanity.

Artie is a great character. It is not often that you find yourself rooting for the serial killer, but in this story you will find yourself doing just that. Artie could be your average every-man, the person you pass by each day and not think twice about. But he is a killer, and a very creative one at that. The author gives us good background on Artie and really brings him to life as the story moves along. This is really Artie's story. There are a few other characters in the story, but the author keeps it simple and tight with a small cast and only a couple key locations.

The author has fun with the As Seen On TV items. Using existing tools and making up some truly funny combinations. Who wouldn't want a Hair De-Greaser and Straightener with a built in popcorn maker. He might start his own trend and soon Ronco will be making some surprising new items.

The author has fun with the gadgets, but in the end this is a horror novel. As the story progresses, more and more blood is spilt as Artie's world unravels. The last act of the story has a scene that makes any Clive Barker story look tame in comparison.

So plug in your book reading light with optional popcorn maker and GPS, and enjoy AS SEEN ON TV.  (Available now in limited quantities, selling fast, first 10 callers get a self-sharpening steak knife with detachable toe-nail clippers)

AS SEEN ON TV can be purchased on AMAZON.

You can learn more about JOHN WAYNE COMUNALE and his other works HERE.

Please visit GRINDHOUSE PRESS to see all the other great books they offer.
By Jim Coniglio at January 19, 2019