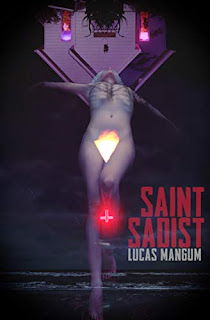 Be warned right off the bat that SAINT SADIST is not going to be a book for everyone. Dealing with the topics of abuse, incest, torture, sex and religion, this story can really cause a roller-coaster of emotions from the reader.

Courtney has grown up in a home where she was physically and sexually abused by her father. When she becomes pregnant with her fathers child, she decides to leave home and attempt to start a new life with her child. After having to turn to prostitution for money, Courtney finds herself taken in at a homestead run by a mysteriously captivating man who promises her a safe place to live and wishes her to follow his religion based around the earth. I this new place safe for her, and what of her growing baby? A battle is about to be waged and Courtney will find herself playing a part she never imagined.

Now you might think that these are all some pretty heavy topics to all be covered in this single story. In any other hands they might be, but the author's writing style is perfectly fitted for this tale. And there could not be a better word to use than "style". This is just a beautifully written book. The regular narrative is at time interrupted by random thoughts, quotes and bible references, but not in a way that disrupts the flow of the story. They give us more insight into the main character and her actions and reactions to the world around her.

It is also a very interesting clash when the topic of religion is addressed. Ambrose, the leader of the homestead teaches a kind of earth religion, where Courtney was raised in a christian way. (Although it is hard to believe her family followed the church when you see the hell she has been subjected to as a child). Courtney's inner battle between the religion she knows and the new one presented to her is a main driving point in the story. There is some very harsh religious symbolism used at times and will likely give people a very Barkeresque feeling.

The author does a wonderful job of keeping the reader guessing. At times the line between what is real and what is not is very fine. Is it really happening or is it just a construct of a very disturbed and abused young woman. A lot of these questions you will still be asking as you turn the last page.

Reading this story is an experience that you should not pass up.

You can purchase SAINT SADIST on AMAZON.

Make sure to visit lucasmangum.com to learn more about the author and his works.

To learn more about the Published please visit GRINDHOUSE PRESS.
By Jim Coniglio at March 16, 2019