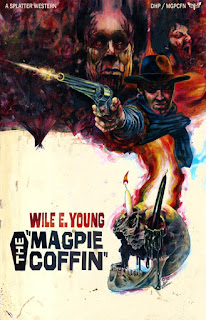 I have to admit that I don't believe I have ever sat and read a Western novel. The closest would have to be Jonah Hex comics. So I was intrigued when Jarod Barbee, Publisher at Death's Head Press, announced a new line of 'Splatter Western' books.

For most reviews I just jump right into the story, but this time I want to take a moment and recognize the amazing piece of art that is the cover to THE MAGPIE COFFIN. Artist Justin T. Coons sets the mood for this story at first glance, you just know you're in for something dark and sinister. This cover reminded me so much of the beautifully painted 'Giallo' covers to come out of Italy back in the day.
The old adage, "you can't judge a book by its cover" is definitely thrown out here. You know what you're getting into with one glance.

OK, I'm done drooling over that cover, onto the story itself. As with all my reviews, this will be Spoiler Free.

I was hooked on this story from page one. If you have read Wile E. Young's work before (if you haven't then shame on you, you should correct that right now), you know he has a breakneck pace. The main character, Salem Covington, is a man haunted and hunted by his past. Through the course of the story you will love the character (in my best western twang), hootin and hollrin' for him, and other times you might hate him. Either way he is a great character.  Wile has taken John Constantine and Jonah Hex (the Lansdale Jonah, not the horrible movie one) and rolled them up to make a character that is likable and at times horrifying in his acts. Salem walks the line between our world and the darkness that lies just beyond our vision.

The main story is that of revenge. Salem sets out on a quest to avenge the death of his mentor, a shaman called Dead Bear and leaves a trail of death and destruction behind him as he endeavors to complete his chosen path. The 'splatter' in 'Splatter Western' is present throughout the story. Salem dispatches his enemies (or are they just prey?) in some monstrous and cringe-inducing ways. Yes, there are some impressive gun fights, it is a western story after all, but it is when Salem truly lets his dark side out to mete out his form of justice, that you will squirm in your seat while reading. There is a scene later on in the book that would probably have Edward Lee say "What the hell Wile, damn".

I never knew I needed a 'Splatter Western' in my life, but now that I have read THE MAGPIE COFFIN, I'll be "chomping at the bit" for the next release.

This has been one of my favorite books so far this year and I recommend it highly for everyone. If you're a horror fan who has never read a western, you are in for a treat, if your a western fan and never read horror, brace yourself, this is not your daddy's Louis L'Amour books, but you're gonna love it!


THE MAGPIE COFFIN can be purchased in Ebook and Print on Amazon.

And make sure to check out DEATH'S HEAD PRESS for other great books.