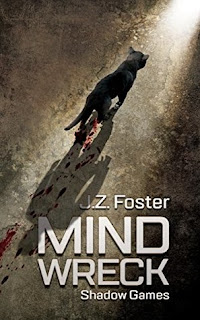 I have to admit that reading this book made my head hurt. Not in a negative way, but because the authors narrative is so descriptive that you feel part of the story. Coming across like a mix of Cronenberg's classic Scanners and Gaimen's American Gods (not bad material to be associated with), the story builds and builds into it's own incredible mythos. There are no wasted moments here. Characters are built up and well formed. The pacing is done to a tee, the action never stops or lulls. The ride begins with the first sentence of the Prologue and carries you to the final page.

Matthew Reed is just a everyman, suffering from migraines he cant control and dreams he does not understand. Enter his father, whom Matthew thought was dead, and his world suddenly becomes a roller-coaster ride he can never come back from. Since I hate spoilers, that's about as much story info I want to give. Just let me say you will not be disappointed by this story.

MIND WRECK - SHADOW GAMES is the opening salvo on what could be an epic series. And J.Z. Foster has set himself up to be a literary force to be reckoned with in the coming years.

MIND WRECK - SHADOW GAMES can be purchased on AMAZON.

For more about J.Z. FOSTER you can visit his website HERE.