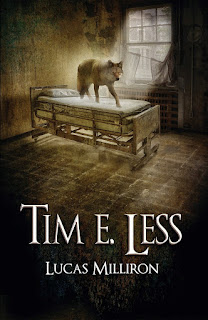 When it looks like things can't get any worse, the accident happens. Tim can't remember a thing, only the sound of twisting metal, of the nightmares, and of Coyote stalking him through the halls of the Still Water Sanitarium.

Follow Tim on his downward spiral through the asylum, through hell and back, as he uncovers the truth of what happened to his family.

If a book were to have a soundtrack, this one would have a song list containing every trippy, head spinning song ever written. I found the lyrics to an old Monkees song replaying in my head, "Come with me, leave yesterday behind. And take a giant step outside your mind."

Lucas Milliron has crafted a tale that crosses back and forth across the line of what is sane and what is just outright crazy.

Tim is a hard working man, just trying to do right by his family. He is not perfect and he knows it, but he does what he can. Everything changes one night after a terrible accident that he can not even recall.

Thus starts his harrowing encounters at the Still Water Sanitarium. Accused of a murder he might or might not have committed. Tim's journey will take him to the ends of his own sanity and beyond as he looks for what he has lost and the answers to all his questions.

The author has created a intricate world inside the Sanitarium that is filled with with well fleshed out and entertaining characters. His eye for detail, especially in the more "out there" parts of the novel are truly awe inspiring to read.

This is a story that you really need to pay attention to as you read. The twists and turns come at you at a machine gun pace as Tim flies headlong toward the truth of his lost memories and more importantly, the fate of his family.

The story plays out like a mixture of Shutter Island, Asylum and One Flew Over The Cuckoos Nest, with bits of Clive Barker and Frank Kafka sneaking in from the corners.

A great book from page 1. This should be on your TBR list for this month.

You can find the book in print and ebook on AMAZON