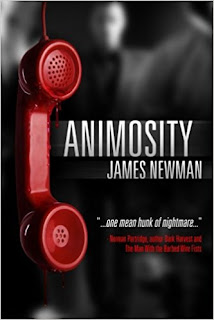 I have always loved books that are written with a writer as the main character. Like I have stated before, it always makes me wonder how much of the character is taken from the actual author.

ANIMOSITY by James Newman is such a story.

The main character Andrew is a writer, a writer of horror. His neighbors on the quiet street he lives on all know his profession and think of him as a local celebrity, even though some just don't understand the "horror" genre.

Andrew loves his house and the quiet neighborhood he lives in. He has recently gone through a divorce that he has finally come to terms with and looks forward to the time he gets to spend with his daughter. But his idyllic setting comes to a crashing halt the day he discovers the body of a murdered child on a construction site on his block.

From that point his life spirals out of control as the friends and neighbors in his community slowly turn on him.

James Newman is no stranger to the crafting of a great story. His past works are all top notch in story and character development. With ANIMOSITY he pulls no punches. Poor Andrew is ran through the ringer over and over as his life is plunged into chaos and despair.  Andrew runs the gamut of emotions as the story progresses. Grief, anger, paranoia and downright fear are all on display.

If you are a fan of the classic Twilight Zone series, you will remember an episode titled The Monsters are Due on Maple Street. This episode deals with mass paranoia that erupts in a small neighborhood that ends with neighbor turning on neighbor. Just take that premise and turn it up about 100 notches to understand what Andrew goes through in the story.

As I was sitting on my porch reading ANIMOSITY I found myself looking over at my neighbors across the street as they sat in their yard. They waved and I found myself wondering what they were saying, could they be talking about me. Could they be saying, "that's the guy who collects all the horror stuff."

That's what such a well written book can do. It affects your real world. It makes you question your own reality in the same situation. What would I do if I was set upon like poor Andrew. Could I survive such an onslaught?

I think I will have to keep a better eye on my neighbors.  Thanks James Newman, you have successfully made me a paranoid mess.

Make sure to pick up ANIMOSITY and James Newman's other great books.

You can order ANIMOSITY in print, ebook and audiobook on AMAZON.