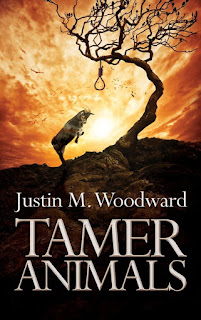 It was just a camping trip.

Down by the old Coheelee Creek Covered Bridge, four high school friends only wanted to kick back, smoke some weed and forget about their problems for day or two. Sure there were stories that the area was haunted, but there was no way they were true.

It was just a local legend.

Decades earlier, an old goat farmer had been murdered by the Klan, hung from a tree near the bridge solely because of the color of his skin. His body was never found. Since then, numerous sightings of a strange creature -- half-man and half-goat -- had been reported in the surrounding woods. He was called the Goatman

It was just the worst night of their lives.

From the moment they arrived, strange noises echoed around them... a sense that they were being watched pervaded the campsite... and that was just the beginning. When one of them vanishes and a horned monstrosity pursues the others, it becomes clear that the legends are true.

If you read my reviews regularly you will know that I was a instant fan of Justin Woodward after reading his last book CANDY. It was such a outstanding story with enough twists and turns to keep you reading late into the night. What could we expect from his next book?

Then along comes TAMER ANIMALS.

(This review is totally spoiler free, so bear with me as I try to explain why you should have already read this book)

We have a great "coming of age" story revolving around four high school friends who are planning a secret trip to see the supposedly haunted Coheelee Creek Covered Bridge. But the haunted bridge is not the only attraction to the area. There is also the legend of a mysterious "hanging tree" and a creature know only as the "Goatman".

As the time of their trip arrives, they head out on what they hope will be a fun time of camping and smoking weed, with maybe a little adventure mixed in. Little do they know what awaits them in the woods. The Goatman is not the only horror waiting in the dark.

So, no more story from here. Let's just say that by the time you reach the mid-point of the story, you will not want to put it down. Justin takes our nice story of four friends and throws everything, including the kitchen sink at them.

Justin showed us in CANDY that he could write from a teenagers point of view, and in TAMER ANIMALS it has been refined even more. Patrick, Dean, Tim and  John are all likable, and more importantly believable characters. These are teenagers with true teenage problems. None of them lead a perfectly happy life, but they each other to lean on for support and friendship.

In TAMER ANIMALS, Justin lets his dark side out, and it is a thing to behold. This is Stephen King's "Stand By Me" gruesomely mated with the Ed Lee's "Family Tradition".

It's a story of friendship, adventure and unspeakable horror.

Justin Woodward delivers a true "gut-punch" to the soul with TAMER ANIMALS.

TAMER ANIMALS can be purchased on AMAZON starting June 22nd.

To learn more about Justin Woodward and his work, visit his fan page on FACEBOOK.