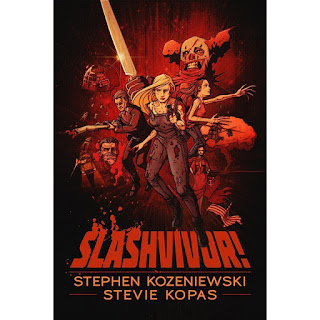 North America's number one reality television show returns with instant fan favorite Dawn Churchill, a plucky, hometown girl from the irradiated ruins of the former United States. Will she survive the night in the electrified, booby-trapped arena or will one of the serial killers pitted against her come out on top?

A night of chills, thrills, and endless buckets of blood. A must-see for Dawn’s innovative use of a shotgun alone. Fun for the whole family!

Ok, I read a lot of books through the coarse of a year. This week alone I have read 3 books. Luckily one of the books was SLASHVIVOR. I have to say that I have not enjoyed reading a book this much in awhile. 2 days is all it took to read this wild ride in a post apocalyptic, alternate history, bloodbath of a story.

In 1983 the US was virtually destroyed in a nuclear exchange with Russia. The United States as we know it is gone and in its place is a irradiated desert, known to those who live there as The Geiger Lands. Populated by the few survivors riddled by radiation and mutations. And a new threat to make their lives even more miserable, the Slashers. Serial Killers preying on the helpless survivors.

What can these poor huddled masses turn to for relief from their plight. How about a sadistic game show that comes on every few months called Try Not To Die. The contestants, picked by lottery, whether they want to or not are thrust into a deathtrap arena to fight for their lives again the most deranged collection on killers on earth. Most of the populace flock to the games to see the violence and death, most even think it a honor to be in the games, but not everyone. Dawn Churchill does not want to be here. She does not want to be fighting for her life in a game run by The Producers, four of the most powerful people in the Geiger Lands. But she knows that to survive she must do anything she can to out wit, out fight and try to survive.

Stephen Kozeniewski and Stevie Kopas give us a dark and violent world, peppered with some of the most colorfully wicked characters you will find anywhere. Yes Dawn is just a woman trying to survive, but Ellen Ripley, bad ass queen of the galaxy,  would be in awe of the transformation that Dawn has to go through in this story.

Where this story really shines is in it's collection of Slashers.  How can you go wrong with a killer animatronic Abe Lincoln who spouts historical quotes with a twist. Or a giant killer clown named Denney. A well mannered cannibal (eat your heart out Hannibal Lecter (literally)) Charming Charlie Whitmore, to a 8 year old Demon child, Gimps, a razor clawed mad woman, a mad doctor, more Gimps,,,,the list keeps going.

Now you might be saying,,"But Jim,,characters like this have been done before",,and you would be right. And that's the rub. SLASHVIVOR knows what it is. This a a bubbling, bloody, music blaring, lights flashing, Theater of The Absurd. The characters are over the top, and they need to be. Not only is this a horror/post apocalyptic story, but it is also a commentary on violence and how people respond to it. The denizens of the Geiger Lands have lost all hope, they long for Try Not To Die. The only escape they have from their horrible lives is to see others die in a spectacle that has been created just for them.

The authors do not pull any punches when it come to the gore. So if you are squeamish, then run away now. (and you probably shouldn't be reading a book blog that revolves around horror novels)
The story is fast paced and has some great character development. With just enough twists to keep you on your toes.

SLASHVIVOR is the unwanted love child of Mad Max Beyond Thunderdome and The Running Man, that grew up and kicked it's parents asses.

I could not recommend this book more.

I hope you have as much fun reading it as I did.

You can purchase SLASHVIVOR in print and ebook on AMAZON.

To learn more about Stephen Kozeniewski visit his Facebook page.

To learn more about Stevie Kopas visit her website.