THE BEAST OF BRENTON WOODS by Jackson R. Thomas 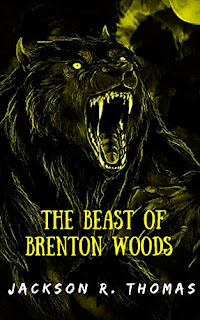 THE BEAST OF BRENTON WOODS by Jackson R. Thomas

The White Wolf, the Beast of Brenton Woods, a legendary creature said to walk like a man. When the full moon rises, it will feast.

Unseen for years, truth has turned to rumor, mere folklore. Until something lures the monster from exile, calling it home.

For Tyler and Ben, a first hand encounter leads to an exploration of the forbidden depths of Brenton Woods, and for Ben, the discovery of a family secret.

When Wendy and her friend's hangout in the abandoned cabin is compromised, the hunt begins. The target of a creature's desire, Wendy is hearing whispers in the night, finding footprints outside her window, and can't shake the dreadful feeling that something is waiting for her.

Deputy Kathy Wilcox understands the disturbances, the shredded carcasses, and the growing list of missing persons in town are connected to something larger than life. Will her acceptance of the legend end in tragedy?

A werewolf novel. Ok, I have to admit I was very trepidatious going into this one. Over the years I can probably count on one hand the books about werewolves I really enjoyed. Two that I can say are my favorites are The Wolfman by Nicholas Pekearo and more recently Dog Days o' Summer by James Newman and Marc Allen Gunnells. A good werewolf story is just hard to come by, and lets not even talk about those werewolves that hang out with the sparkly vampires.

The Beast of Brenton Woods was a very pleasant surprise.

There is no first act going on here, no build up to a first encounter, we jump right into the action with best friends Ben and Tyler running from the creature as they are in the woods behind Ben's home. From here the steamroller never stops rolling. As victims start turning up, the legend of The Beast of Brenton Woods starts working it's way into the minds of the people of the town. A legend that has come back with a vengeance.

Jackson Thomas gives us a true werewolf story. No misunderstood creature, no love story, no man fighting his inner beast, this is a monster plain and pure, out for blood and carnage. The White Wolf is a force of nature tearing it's way through anything and anyone that crosses his path.

Don't get me wrong, there is more to this story than blood and gore. The small cast of characters are not given lots of back-story, but they do not need it. They are thrust into the story at full speed and we really only need to know about them in the here and now. I found myself rooting for a character, while wishing the White Wolf would grab another. The character of Ben is more fleshed out as his family has a greater role to play.

The author also shows us that humans can sometimes be as big a monster as the White Wolf itself.
Secrets will be told, cover-ups revealed and blood will flow.

The Beast of Brenton Woods is a gruesomely beautiful take on werewolf lore.


You can order THE BEAST OF BRENTON WOODS in print and ebook on AMAZON.