12 GAUGE: SONGS FROM A STREET SWEEPER by Dustin LaValley 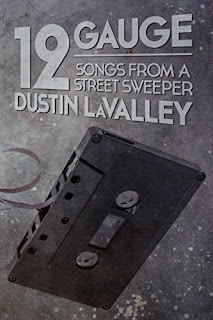 12 GAUGE: SONGS FROM A STREET SWEEPER by Dustin LaValley

Spinner
A prison escapee leads law enforcement on a chase through the Adirondack Mountains, where they encounter a reclusive elderly man with a dark secret.

12 GAUGE: SONGS FROM A STREET SWEEPER is a collection of 3 novella length stories that all have one thing in common, lots and lots of blood.

Dustin LaValley gives us stories that feel real, that could happen in the real world. That is what I think is the scariest part of all the tales. He shows us that we humans are the most violent creatures around.

The first novella, Spinner is my favorite of the bunch. It has a great noir crime thriller feel to it with a very dark twist. An escaped killer and his girlfriend are loose in the Adirondack Mountains and on the run from the police. But they will soon learn that they are not the scariest monsters loose in these woods. This is your classic cops in pursuit of the escapee story. Like all the stories in this collection, Dustin does not shy away from the blood and gore. The pursuit takes them through the mountains to a shocking and unexpected conclusion. These are well built characters, just enough info is given to flesh them out and make them believable. The story never lulls and the little connections made between characters is great.

The second novella, H/armed was my least favorite of the three. This is an all-out gore fest in the fashion of Battle Royale or The Belko Experiment. People are trapped in a department store and meant to fight to the death, all under the watchful eye of The Director. The participants are divided into teams, The Sore Thumbs (gamers), Black Lights (stoners), Rodeos (cowboys), Cocoa Beans (hipsters) and so on. There are a lot of characters introduced in this short story, and no where near enough time to flesh any of them out. Another thing I did not care for is the responses the author has given some of the characters. He takes the stoner/gamer/hipster arch types to the very extreme. To the point that a hipster in the moment of being chased by a killer has time to critique a bad shirt, or the gamers only defense being karate moves they learn from Street Fighter. The premise of the story plays out good, but there needed to be less characters running around and maybe less tongue-in-cheek portrayals of some of the groups. I do have to say that this story does have one hell of a soundtrack.

The last novella, The Deceived is a great little character driven thriller. Only three people interact throughout the whole story. A young couple pays a visit to a unsuspecting man. Their intentions are not good from the start; they have just entered a home, and a situation way out of their understanding.
We do not get much background into these characters, but that is OK. This is an "in the moment" story. We don't need to know their past, just what is happening now. And like the stories that come before it, there is violence, there is blood and there is terror. Three people, one claustrophobic house and no way out, make a very thrilling and fast-paced story.

Overall this is a great collection that will appeal to many readers. Dustin weaves some excellent stories that span the gap between noir thriller and outright horror.


You can purchase 12 GAUGE: SONGS FROM A STREET SWEEPER on AMAZON.

To see more books published by Sinister Grin Press, make sure to visit their WEBSITE.