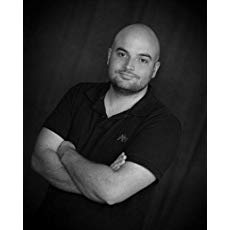 Today I am joined by Justin M Woodward, author of The Variant, Candy and Tamer Animals. Justin, thank you for making some time in your schedule for this interview.

You have released 3 books in the last 2 years, 2 of them within a month of each other just this summer. What kind of writing routine do you try to keep to?

-- I wish I had a writing routine to speak of! I'm certainly not THAT fast of a writer. I try to write when I have spare time. I work an average of 45 hours a week, plus I've got the two kids (my four year old is surgically attached to me when I'm home) so a lot of nights for an hour or so before bed I'm left asking myself 'Do I write, or do I read?' I will say this, though, in regards to releasing two books so close together. TAMER ANIMALS was actually finished in the fall of 2017. Candy was written directly afterwards as a weekly serial and then published around the same time.


Did you have any major inspirations that helped you get into writing?


-- When I was a kid I used to beg my babysitter to help me write a novel. I told her 'I'll tell you what to say, and you'll write it down.' Unfortunately, we decided to part ways due to creative differences. When I got older (mid-twenties) a buddy of mine, Jim Goffio, wrote and self-published a novel called HOUSE OF THE HOLY which I enjoyed very much. We talked about the process and I decided I would give it a go. A year later, THE VARIANT was released.

All three of your books have been very different in theme and structure. Which one did you enjoy working on the most?

-- Definitely CANDY. Though it was tedious trying to release a chapter every Saturday (some weeks I was writing the installment an hour before I released it) I loved that much-needed kick in the ass that book provided to get me working. Plus, CANDY is just so much fun.


teenage girl. Did this create any writing challenges for you?


-- The short answer—no. I just really didn't feel like I had to go very far out of my way to make CANDY seem real and believable. It just came naturally to me, I guess. It might also help that aside from sex, CANDY is basically me, haha. I'm very much a cynical smartass.


Your latest novel, Tamer Animals is a coming of age/backwoods horror. It also introduced us to The Goat Man. Many fans of the book have asked, will we see the Goat Man again?


There are many authors who say they do not read reviews of their books. Do you read the reviews of your works and do you find that they help or hinder you in your continued writing?


-- Those many authors are flat out lying. Every author reads reviews. As far as whether they help or hinder, it all depends on the type of review. If a reviewer gives specific, legitimate reasons why they did (or didn't) like a book, that can be helpful. But, like most art, writing is subjective. Unless a reviewer is mad about some sort of error they found in a book (haven't had this be the case, just using as an example) then I really don't bother myself too much with what they thought. I would say also that positive reviews help a writer to determine which path to take with their next book (or not) if they are a writer who cares about that sort of thing (I'm not). I told you I was a cynical smartass!


Your are very active on social media, posting every day on your Facebook Fan Page (Justin M. Woodward Fan Club). Do you find that social media is important for authors today?


-- Unless your book magically makes its way on to the New York Times Bestseller list, social media is crucial to all authors these days. We can't all be Stephen King, unfortunately. I'm very thankful for the fans (and friends) I've made on social media. I would take it a step further, however, and warn other authors that it works both ways. If you're an asshole on the internet, I'm not going to read your book. It's a double-edged sword. I try to be as real and cool as I can with people. But I've found that social media can also help steer me AWAY from certain people's work.


I know that you are friends with fellow author J.Z. Foster. You have had some entertaining exchanges on social media. So here is your chance, what do you really think of J.Z. ?

Before you go I do have to ask if you have any new projects in the works that you might be able to give us a hint about?


-- Sure, why not. I've just finished a round of short stories that were submitted to various places and I find myself staring at some (nearly) blank slates wondering what's next. Also, I was busy working on the release of the audio books for THE VARIANT, CANDY, and TAMER ANIMALS. I've started and stopped many things that I will eventually pick up later. For right now, I'm working on a novel that has been bouncing around my head for years, begging to be written which I haven't mentioned anywhere else yet. It will be part psychological thriller, part forbidden love story (I know, shock!) and as always, it will be dark. Its title is: WATER THE FLOWERS.

Justin, thank again for your time, it has been great talking to you. I look forward to reading more of your works in the future.

Justin also asked me announce that starting today the TAMER ANIMALS e-book is now on sale for only .99 for the next five days. Now is your chance to pick up this truly frightening book at an amazing price.

I will also be giving away 3 e-book copies of TAMER ANIMALS. To enter to win one just visit
One-Legged Reviews on Facebook and post a comment on the Giveaway post. Winners will be picked at random on Monday.

And for even more Justin Woodward fun, tomorrow Justin and fellow author Jay Sigler (TRAIN THOUGHTS) will be on Spilling Ink Live from 7pm to 8pm CDT. You can visit the event page HERE.

All of Justin's book are available now in print, e-book and audio book on AMAZON.


You can read my past reviews of CANDY and TAMER ANIMALS .....HERE and HERE.

Email ThisBlogThis!Share to TwitterShare to FacebookShare to Pinterest
Labels: Interviews