AD NAUSEAM: NEWSPRINT NIGHTMARES FROM THE 1980s by Michael Gringold 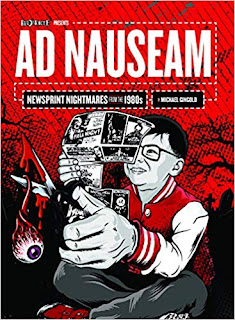 AD NAUSEAM : NEWSPRINT NIGHTMARES FROM THE 1980s
by Michael Gingold

Published by 1984 Publishing and Rue Morgue

Growing up in the 1980s, Michael Gingold became obsessed with horror movies, and his love of the genre led him to become a Fangoria writer and editor for nearly 30 years, as well as a Rue Morgue contributor. But before all that, he took his scissors to local newspapers, collecting countless ads for horror movies, big and small.

Ad Nauseam: Newsprint Nightmares from the 1980s is a year-by-year deep dive into the Gingold archive, with more than 450 ads! Within these pages you'll see rare alternate art for Gremlins, Child's Play, The Blob remake, and the Friday the 13th and A Nightmare on Elm Street franchises. You'll also revel in oddities including Psycho from Texas, Dracula Blows His Cool, Blood Hook, Zombie Island Massacre, and many more.

Gingold provides personal recollections and commentary, and unearths vintage reviews to reveal what critics of the time were saying about these films. He also interviews the men behind legendary exploitation distributor Aquarius Releasing to learn how they built buzz for shockers like Make Them Die Slowly and Doctor Butcher M.D.

Just opening the first page of AD NAUSEAM: NEWSPRINT NIGHTMARES FROM THE 1980s brought back so many memories. I can remember grabbing the Friday newspaper, jumping on my bed and heading right to the last 3 pages that held the movie ads. A few snips later and those choice horror movie adverts would be scotch taped to my wall in all their black and white glory.

What a time the the 80s were for horror fans. So many movies hit the big screen and a break-neck pace. It seemed that every week a new scare was fighting for your hard earned money.

Michel Gingold has taken his love of horror movies and his past habit of collecting newspaper ads and turned it into a very entertaining and informative book that any child of the 80s should have sitting on their bookshelf. 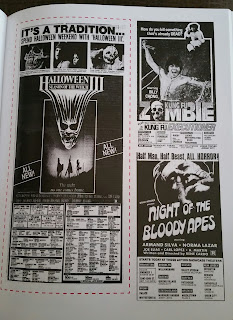 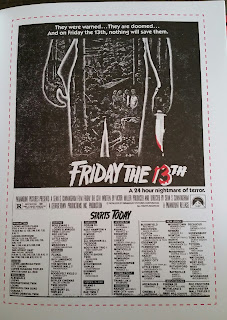 Paging through the book, you will come across movies you know (Evil Dead, The Thing, Hellraiser
Halloween II and so many more) and those that you may never have heard of before (Silent Madness, Deathbed, The Doctor and the Devils). Not only has the author given us a look at the classic clippings, he has included his thoughts on some of the films and snippets of movie reviews from that time period.

These ads were the only way a lot of people knew what movies were coming out, and our first look at what horrors they might contain. In the early 80s we didn't have the internet to bombard us with information. We had the newspaper, Fangoria magazine and Fanzines. It was a wonderful world of print.

The book itself is a beautifully done hardcover with very clear reproductions of the ads on a nice glossy page. 1984 Publishing and Rue Morgue did a wonderful job in producing a quality book filled with information and nostalgia. 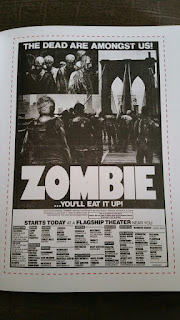 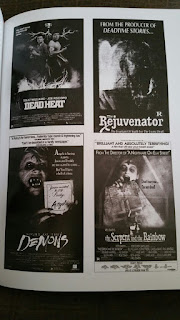 So many memories contained in these pages. If you are younger, this is a great way to peer into the past, the pre-internet days, when you had to get your hand dirty with newsprint to see what wonders were playing in the theater.

For an extra treat I would recommend searching out some of Michael Gingold's fanzine Scareaphanalia. 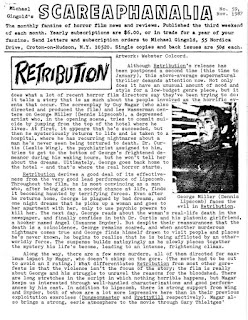 I believe he published somewhere around 100 issues. Good fanzines are now a thing of the past, but these issues hold up and are still great reads for any horror fan.

You can purchase a signed copy of the book (while they last) at the 1984 PUBLISHING website.

It can also be purchased on AMAZON.

And make sure to stop by the RUE MORGUE website for more horror goodness.